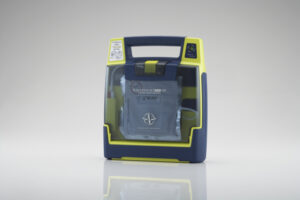 Sudden Cardiac Arrest (SCA) is a life-threatening condition that must be treated within minutes if the victim is to survive. The only therapy which can treat the life-threatening arrhythmia that occur during SCA is defibrillation; the earlier the better. Various studies have determined that for every minute defibrillation is delayed survival falls rapidly. In one study it was determined that this fall in survival was around 7 to 10% while the British Heart Foundation (BHF) have concluded that the fall in survival percentage is 14%.

Defibrillation for the SCA victim needs to be part of the ‘pattern of care’; a well-establish process – the Chain of Survival – assists the rescuer in giving the victim the best chance of survival; call for help, early CPR, early defibrillation and advanced life support.

Automated External Defibrillators (AEDS) are designed specifically to enable non-medical rescuers to treat SCA victims as they are safe, easy to use and effective.

There are, however,  a number of myths and mis-information around the whole issue of SCA and the use of an AED.

Lay persons are often confused between a heart attack and a sudden cardiac arrest. These are two separate medical conditions and although the first can lead to the second, an AED is designed to treat the unresponsive, not breathing victim the indications for SCA and the use of an AED.

Clinically, defibrillation does not ‘jump’ start the heart. Delivery of a biphasic electrical current depolarises the heart cells allowing the organ’s natural ‘pacemaker cells’ to re-start and the heart to return to normal electrical activity or sinus rhythm. During SCA the heart is exhibiting ventricular fibrillation (VF) ; a chaotic discharge of electrical current that prevents oxygenated blood from circulating or pulseless ventricular tachycardia (VT) which while more regular is still too fast to again allow the effective circulation of blood thus denying the brain of oxygen.

People often ask about the ‘danger’ of rescuers or bystanders receiving a shock if they are touching the victim of SCA during defibrillation. While we have adopted the historical warning ‘stand clear’ from the use of manual defibrillators, studies show that current leakage from a defibrillation device using adhesive pads is actually minimal. The majority of current delivered being discharged into the chest and heart. The actual amount of current leakage recorded in one study measured this as well below 2,500 microamps, the international standard relating to this threshold. To put this into layman’s terms this equates to the current from a standard nine volt battery. The European Resuscitation Council (ERC) Guidelines (2010) describes 29 instances of death or harm from a manual defibrillator, however this is a different type of device, produced for professional rescuers, utilising metal paddles (although some are available with adhesive defibrillation pads.

All in all, AEDs are safe, effective and easy to use so why would you not want to place these in your workplace or public area?
See on stejey.blogspot.co.uk