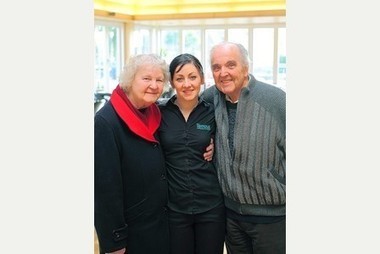 A GRANDFATHER has told how he would be “eternally grateful” to the woman who saved his life after he collapsed in a Falmouth restaurant.

John Ollernshaw, from Flushing, would have died if a member of staff from Princess Pavilion had not resuscitated him during a cardiac arrest in November.

John Ollernshaw and wife Sylvia, with Ceinwen Morgans, who performed CPR on him after he collapsed.

Catering team leader Ceinwen Morgans started CPR on the 82-year-old within minutes of the arrest, having been trained in first aid just a few weeks earlier.

Mr Ollernshaw said: “I guess I was in the right place at the right time.

“If it had happened somewhere else, who knows what the chances of finding someone who knew what to do would have been.

“I will be eternally grateful to that young lady and the fact she had completed the first aid course.”

“He went straight down and the girl just started resuscitating him immediately until the paramedics came,” she said. “She cracked two of his ribs in the process and she had to keep going for a considerable amount of time. It was that which saved his life.

“We have been told that if the waitress hadn’t been trained he would have died before the paramedic arrived.

“It was just amazing really, it seemed like it was just instinctive for her which was marvellous.”

It was the first time Ms Morgans, from Falmouth, had put her training into practical use since completing the course. She said: “It all just happened so quickly and luckily I knew what to do. Nothing can prepare you for the real thing. I think my adrenalin carried me through and I was able to just get on with it but afterwards it was a little bit traumatising.

“If there hadn’t been someone like me there that day then John would have died and his family would have faced Christmas and the new year without him.”

Mr Ollernshaw, a dad of two and grandfather of three, had to be defibrillated on the way to the Royal Cornwall Hospital in Truro. In the ambulance, his wife was warned he was unlikely to survive the night.

“Our local vicar came with me to the hospital and by the time we got there the staff had managed to get him going on the machines because he wasn’t able to do it himself,” said Mrs Ollernshaw.

He remained on life support for four days before he was able to breathe on his own, then spent almost a month in hospital, during which he underwent heart-bypass surgery.

Alison Brown, cardiac rehab nurse at the Royal Cornwall Hospitals Trust, said: “It is fantastic that he was in a public place where there was someone who had been recently trained in CPR.”