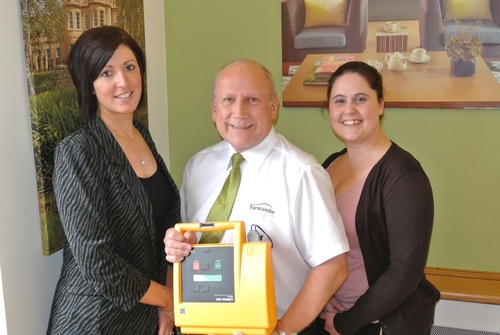 THE heroic actions of a quick thinking woman from Alcester and her friend saved a cyclist’s life when he collapsed on a country road.

The man was cycling along Fish Hill near the Cotswold village of Broadway last March when he collapsed.

Fortunately he was spotted on the side of the road by Gemma Guedes, 30, from Alcester, and her friend Katie Nightingale, who were only travelling down the road by chance after taking a wrong turn on their way to take Gemma’s pet puppy for a walk.

The pair spotted the man receiving CPR from a fellow cyclist and immediately remembered that there were defibrillators kept at the nearby Farncombe Estate, where they both used to work.

“It was very worrying to see someone receiving CPR as it was the first time that I have ever been in that situation,” said Mrs Guedes. “We were just very lucky that Farncombe Estate was so close and that they have trained people to use the defibrillator.”

The friends called ahead and were met by security supervisor Tony Haines, of Pensham, near Pershore, who had grabbed a defibrillator. They dashed back to the stricken man with Mr Haines – an experienced St John Ambulance volunteer – in tow and used the defibrillator to re-start his heart.

He was then rushed to Worcestershire Royal Hospital, where grateful medics confirmed the cyclist would not have survived without the defibrillator and their quick-thinking actions.

“When we arrived the man was starting to turn blue around the lips – Tony gave him a single shock and his heart re-started. After a few minutes the man started talking, which was a huge relief to everyone.

“We waited for the Air Ambulance to arrive and once the man was airlifted to the hospital you could feel that everyone felt a great sense of achievement,” added Mrs Guedes.

Mr Haines said he was glad the estate had the vital life-saving equipment . Both he and St John Ambulance are now urging more places, especially in isolated rural locations, to get equipment of their own.

Mr Haines said: “We gave the man a single shock and his heart restarted. Within a few minutes he was talking, it was amazing.

“This incident just goes to show what a difference a defibrillator can make and I would urge as many organisations as possible to have one on hand in case of emergency.”
See on www.redditchadvertiser.co.uk