Why do Marathon Runners Wear Foil Blankets After the Finish Line? 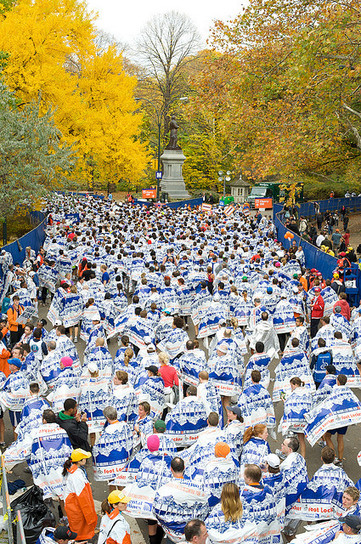 If you have ever seen a marathon or watched one on TV you may have wondered why, when the runners have all finished the race, they get given those thin foil-like blankets. The blankets they are given help the athlete to regulate their body temperature, after a race a runner’s temperature will drop quite rapidly because they have ceased working their muscles.

As you can imagine, the blanket is not made from your run of the mill aluminium foil, they are actually a material that was in it’s earliest form used at NASA, which is where they get their colloquial name ‘space blankets’.

Astronauts use them, but they are also used in many areas of the public services too, especially in search and rescue, and emergency services.

The widely available space blanket, which you can now buy from Oh-PublicServices.com, was created as part of the American space program. In 1973 the heat shield had broken on the orbiting Skylab Space Station and was causing it to overheat. The temperature inside the station was nearly 54 degrees Celsius.

The temperature inside the station was rising and NASA began to worry about the equipment and the food that was stored. To regulate the temperature of the station the NASA engineers got in touch with National Metallizing a company that coated toys with thin metal and created Christmas decorations. NASA realised that the thin metallic sheets deflected heat, so working with National Metallizing they created a reflective parasol which was attached to the Skylab Space Station giving the station the ability to keep a normal temperature.

Essentially, a giant blanket made from the same material used in Christmas Tinsel was used to help protect a whole Space Station!

Like the Thermos Flask before it, the space blanket works on the same principle not only will it keep heat out, it will also keep the heat in. This is why the material that was used on the Skylab Space Station is also perfect for marathon runners. The heat the athletes are giving out will then be held inside the blanket allowing them to regulate their temperature as their body heat drops.

The foil blanket is also best used in emergency situations, search and rescue and before patients go into surgery to help regulate patient temperature.