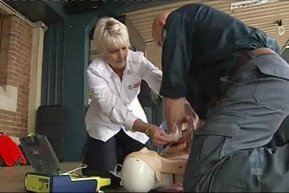 Up to a quarter of defibrillators installed in public places don’t work, according to the agency in charge of registering the equipment.

The Automated External Defibrillator Deployment Agency has launched a new set of guidelines in an effort to stop flat batteries and software malfunctions in the units.

The agency’s Graeme Pell said electronic defibrillators in workplaces, sporting clubs and other public places did not always work.

“There’s nothing more frustrating than coming across somebody who’s got a sudden cardiac arrest who clearly needs urgent defibrillation to save their lives and find that the defibrillator that you have in your hand, or in fact can’t locate, simply won’t do the job,” he said.

In the United States, research has found that up to a quarter of equipment installed in public areas at any time did not work because of flat batteries, damage or software malfunctions.

Mr Peel estimated the figures were similar in Australia. “Probably 20 to 25 per cent of defibrillators aren’t working,” he said. “We also know that unless you get fibrillation on a sudden cardiac arrest patient within the first couple of minutes, then their chance of survival is very remote. “Anecdotally, we believe that there probably are people dying unnecessarily.” Up to 33,000 Australians die from sudden cardiac arrest every year.

The agency today released a set of guidelines that helps businesses and organisations make sure equipment was ready for use in an emergency. It is also setting a up voluntary register to keep track of all defibrillators around the country.

Mr Peel said there was one positive change already underway – defibrillators were becoming easier to use.

“You open it up and it talks to you. It’ll tell you pull out the pads, where the pads have to be located and connections then basically you stand back and wait,” he said.

“The battery’s got to be working, the pads have got to stick, software has got to be functioning.

“There’s been a huge amount of enthusiasm but not as much standardisation.”