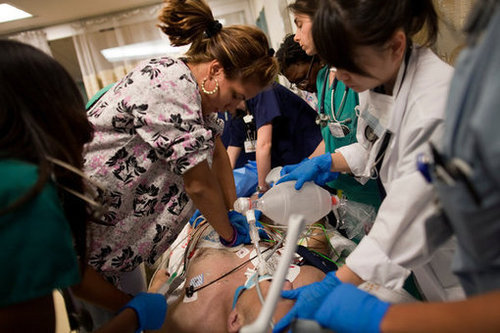 When a hospital patient goes into cardiac arrest, one of the most difficult questions facing the medical team is how long to continue cardiopulmonary resuscitation. Now a new study involving hundreds of hospitals suggests that many doctors may be giving up too soon.

The study found that patients have a better chance of surviving in hospitals that persist with CPR for just nine minutes longer, on average, than hospitals where efforts are halted earlier.

There are no clear, evidence-based guidelines for how long to continue CPR efforts.

The findings challenge conventional medical thinking, which holds that prolonged resuscitation for hospitalized patients is usually futile because when patients do survive, they often suffer permanent neurological damage. To the contrary, the researchers found that patients who survived prolonged CPR and left the hospital fared as well as those who were quickly resuscitated.

The study, published online Tuesday in The Lancet, is one of the largest of its kind and one of the first to link the duration of CPR efforts with survival rates. It should prompt hospitals to review their practices and consider changes if their resuscitation efforts fall short, several experts said.

“One of the challenges we face during an in-hospital cardiac arrest is determining how long to continue resuscitation if a patient remains unresponsive,” said Dr. Zachary D. Goldberger, the lead author of the new study, which was financed by the American Hospital Association, the Robert Wood Johnson Foundation and the National Institutes of Health. “This is one area in which there are no guidelines.”

Dr. Goldberger and his colleagues gathered data from the world’s largest registry of in-hospital cardiac arrest, maintained by the American Heart Association, identifying 64,339 patients who went into cardiac arrest at 435 hospitals in the United States from 2000 to 2008.

The researchers examined adult hospital patients in regular beds or intensive care units, excluding patients in the emergency room and those who suffered arrest during procedures. They calculated the median duration of resuscitation efforts for the nonsurvivors rather than the survivors, in order to measure a hospital’s tendency to engage in more prolonged resuscitation efforts.

One of the first surprises was the significant variation in duration of CPR among the hospitals, ranging from a median of 16 minutes in hospitals spending the least amount of time trying to revive patients to a median of 25 minutes among those spending the most — a difference of more than 50 percent.

The researchers initially thought they would find that some patients were being subjected to protracted resuscitation efforts in vain, said the senior author, Dr. Brahmajee Nallamothu, an associate professor at the University of Michigan and a cardiologist at the Ann Arbor VA Medical Center.

But as it turned out, those extra minutes made a positive difference. Patients in hospitals with the longest CPR efforts were 12 percent more likely to survive and go home from the hospital than those with the shortest times.

Dr. Nallamothu and his colleagues found that neurological function was similar, regardless of the duration of CPR.

The patients who got the most added benefit from prolonged CPR were those whose conditions do not respond to defibrillation, or being shocked. The extra time spent on prolonged CPR may give doctors time to analyze the situation and try different interventions, they said.

“You can keep circulating blood and oxygen using CPR for sometimes well over 30 minutes and still end up with patients who survive and, importantly, have good neurological survival,” said Dr. Jerry P. Nolan, a consultant in anesthesia and critical care medicine at Royal United Hospital NHS Trust in Bath, England, who wrote a commentary accompanying the article.

Dr. Stephen J. Green, associate chairman of cardiology at North Shore-Long Island Jewish Health System, who was not involved in the study, said hospitals might have to modify their practices in light of the new research.

“You don’t want to be on the low end of this curve,” Dr. Green said. “Hospitals that are outliers should reassess what they’re doing and think about extending the duration of their CPR.”

Still, he and other experts worried that the new findings could lead to protracted efforts to resuscitate patients for whom it is inappropriate because they are at the end of their lives or for other reasons.

“There isn’t going to be a magic number,” Dr. Green said. “If you’re in there 10 to 15 minutes, you need to push higher, but as you get up higher and higher, you get to the point of very little return.”

The study authors acknowledge that their research does not indicate that longer CPR is better for every patient.

“The last thing we want is for the take-home message to be that everyone should have a long resuscitation,” Dr. Goldberger said. “We’re not able to identify an optimal duration for all patients in the hospital.”